Posted by RosB on 7/11/2018 to News
Monitor Audio Silver 300 is extraordinary value. How’s this for a recipe for a high-value speaker: Take a highly skilled designer, match him to a company with an audiophile ethos, mix in economy-of-scale manufacturing, and add the cost savings conferred by a company-owned factory in China. Put those ingredients together and you have the new Monitor Audio Silver 300, an astonishing amount of speaker for $2000 per pair.
Read Stereophile review by Kalman Rubinson below. 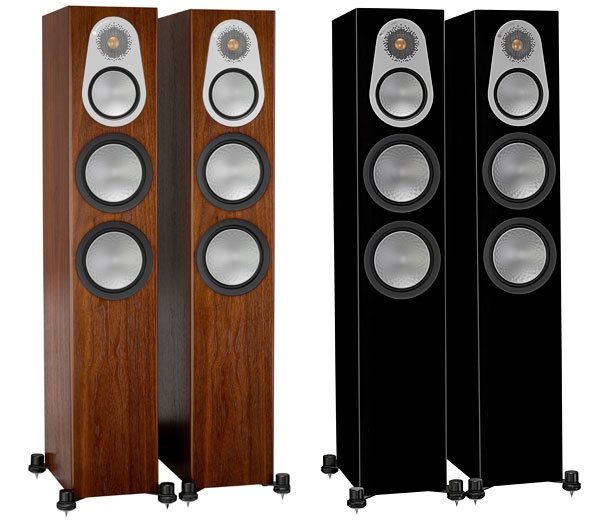 It seems to me that my review of Monitor Audio's Silver 8 loudspeaker was published only a few months ago. Actually, it's been three years. The Silver 8 so impressed me that I bought three of them, along with two Silver 2 bookshelf speakers, for my multichannel system in Connecticut—and still greet them as the newcomers to my system. So installing and reviewing their successors, the 300, from the sixth generation of Monitor's Silver line, seemed very familiar.

Description
The Silver 8 and Silver 300 are quite similar three-way speakers. Their external dimensions differ by only fractions of an inch, their electrical specifications by similar degrees. The price is unchanged: $2000/pair. Both are products of the same design philosophy—slim, floorstanding cabinet, three-way, four-driver configuration—their differences representative of what Monitor has since felt it could do better.

The Silver 300s I received came in the premium Gloss Black finish (add $200/pair), which makes them look a bit more formal than the Black Oak of my Silver 8s, but the fit and finish of both are equally outstanding, particularly for the price. On the front of the 300 are two 6" woofers with dish-shaped, ceramic-coated, aluminum-magnesium (C-CAM) cones; above these is a similar-looking 4" C-CAM midrange driver, and at the top a 1" gold-colored C-CAM dome tweeter. Each drive-unit is held in place with a single long bolt fastened to a threaded insert on the enclosure's rear panel. This means that the entire frame of each driver is pressed into the enclosure by a mounting system that also increases the cabinet's overall rigidity. Each woofer is housed in its own tuned enclosure, vented at the rear through a port with a flared aperture, the port's bore striated to minimize turbulence. Foam plugs are supplied to block the ports if the bass in a specific room sounds excessive.

The midrange driver, too, has its own chamber, but it and the newly designed dome tweeter are also attached to a teardrop-shaped plate that includes a fixed, protective, perforated cover for the tweeter. The pattern of perforations is complex, and horizontally but not vertically symmetrical. The tweeter is centered between the left and right edges of the cabinet, close to the top cabinet edge. A lightweight, racetrack-shaped grille of sheer black fabric can be magnetically attached to cover all four drivers; I did all of my listening with the grilles in place.

On the Silver 300's rear are: the hex bolts that lock the drivers in place, one bolt per driver; the ports for the woofer sub-enclosures; and two sets of multiway terminals, bridged with jumpers; the speaker can be biwired or biamped.

The earlier Silver 8 had adjustable feet or spikes that screwed directly into its bottom panel, or into a matching plinth that in turn fitted into the bottom panel. Monitor recommended using the plinth, as it widened the speaker's stance and made it more stable, but allowed that some might prefer the look of a plinth-less Silver 8. Not I.

Instead of a plinth, each Silver 300 comes with four steel outriggers that bolt to the cabinet bottom, and to which are fitted the feet or spikes. This is a big improvement in several ways. First, the outriggers provide a stance even wider than the Silver 8's plinth, which is important: Although the exterior dimensions of the Silver 8 and Silver 300 are identical, the 300 weighs 6 lbs less, yet with the outriggers stands more securely and is more difficult to upset. Second, these are some of the few outriggers that are not so outlandishly macho as to attack my toes if I'm doing things near the speakers. Finally, the Silver 300 sits about 1" lower on the outriggers than does the Silver 8 on its plinth—which means that the bottom edge of my flat-screen TV more easily clears the 300s' tops. 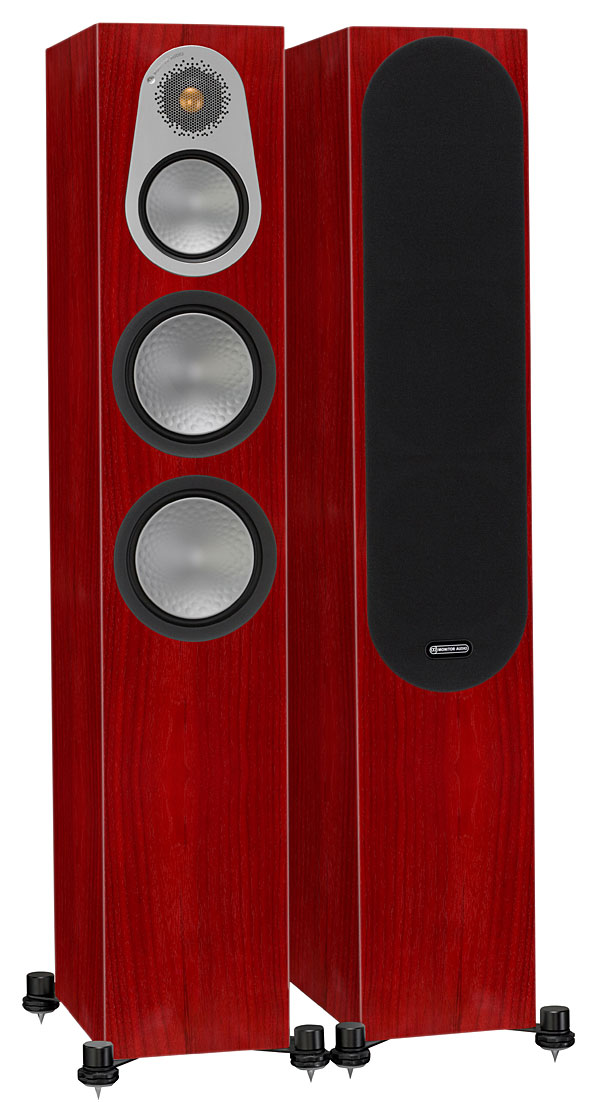 Setup & Listening
Unpacking and setup were routine. I slipped the Silver 300s into the spots vacated by the Silver 8s, connected them, and began listening. Since the 300 is not substantially different in appearance from and shares the heritage of the 8, I wasn't surprised to find them just as immediately appealing. As I said of the Silver 8 three years ago, "I heard a welcome clarity in the midrange that gave all music a natural presence." Male and female voices, and orchestral and solo wind instruments, were tonally balanced and clearly delineated, making extended listening completely unfatiguing at any volume level.

But there was more to the Silver 300. In particular, the integration of the outputs of its treble and midrange drivers was notably smooth for a speaker costing only $2000/pair; as a result, massed voices were both more subtly revealed and less disturbed by obtrusive sibilants. Eriks Ešenvalds' The First Tears, from The Doors of Heaven, with the Portland State Chamber Choir directed by Ethan Sperry (CD, Naxos 8.579008), began with the choir's hushed voices spread from speaker to speaker and just beyond. Soon individual voices emerged, each with a distinctive character and from a particular position in the choir. As the recording proceeded through its dramatic peaks to its conclusion, there was never any unnatural highlighting of the many solo voices, nor were they masked by the sound of the larger ensemble. Thanks to the seamless handoffs from and to the Silver 300's tweeter and midrange—and John Atkinson's superb engineering of this recording—I had a transparent view of the entire performance. 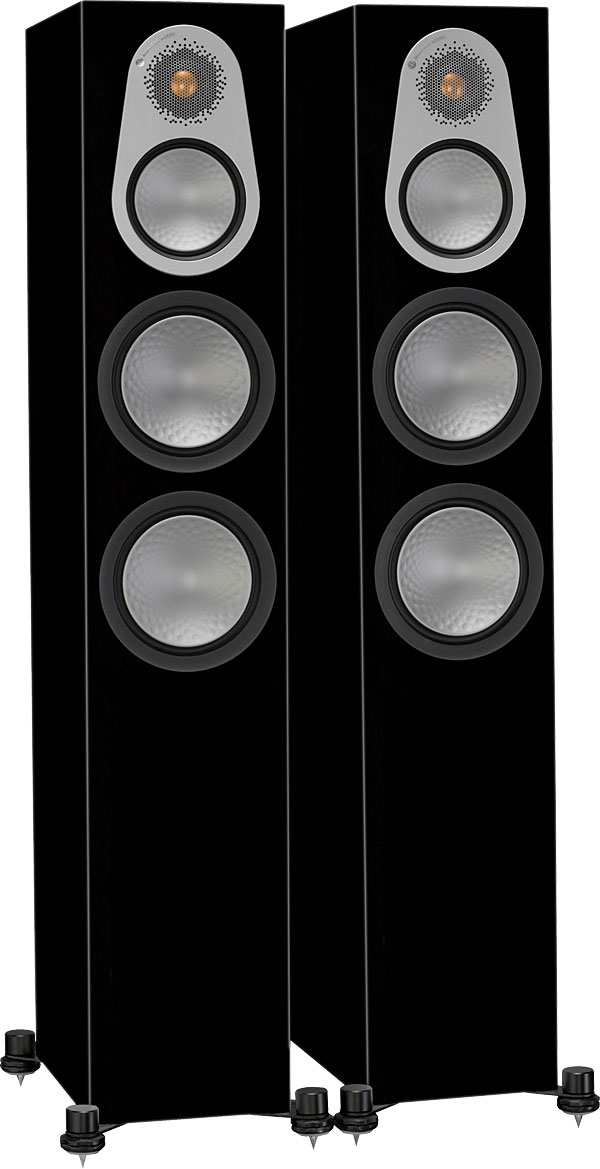 I had a similar impression with Luciano Berio's Sinfonia for Eight Voices and Orchestra, in the exuberant performance by Peter Eötvös conducting the London Voices and the Gothenburg Symphony Orchestra (CD, Deutsche Grammophon 4775380). In the third movement, In ruhig fliessender Bewegung, listen to the superimposition of the person speaking on the swirl of voices and instruments as Berio appropriates bits from Mahler's Symphony 2. The complexity of the interplay was clearly revealed by the Silver 300's lovely reproduction of the treble range.

In terms of grip and delineation, the Silver 300's bass response was better than I might have expected from two 6" woofers. Eric Clapton's Unplugged(CD, Reprise 45024-2) was recorded at Bray Film Studios, in the UK, before a live audience, and has the ambiance of a relaxed concert—a feeling slightly enhanced by the inclusion of some very-low-frequency nonmusical noises, which the Silver 300 reproduced quite accurately. The bass elements of the music, too, were good, if in some direct comparisons the Silver 300s seemed to produce less bass overall than the Silver 8s. But I'd take their clean, taut performance over the more common undamped bass. If you want more bass, move them closer to the wall behind them than they were in my room—24" from wall to rear panels—or add a subwoofer.

The Silver 300s could present a seamless soundstage that extended slightly beyond the outer edges of both cabinets and had excellent center fill. Depth of soundstage was also good with all recordings, particularly the Ešenvalds disc. The Monitors' dynamic range exceeded what is neighborly for the smallish, 1800-cubic-foot listening room of my house in quiet exurban Connecticut. 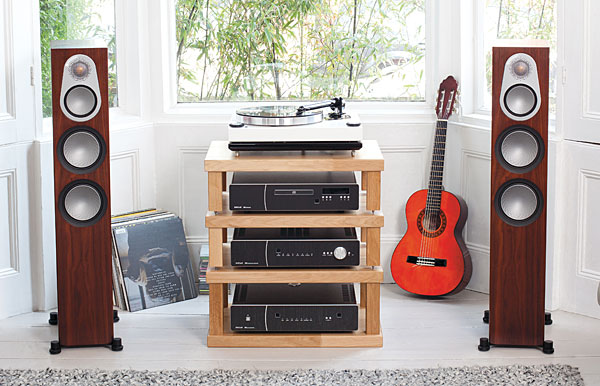 The Silver 300s weren't capable of the kind of X-ray transparency that more exotic, more expensive speakers can achieve, but their upper range was free of blemish and brightness. Nor could they load my room with the upper-bass weight that a substantially larger, more expensive speaker can heft. Monitor does make speakers that can—eg, the Platinum PL300 II. The Silver 300 is an improvement over the Silver 8, to be sure; more significant, it is an advance over all those speakers to which I compared it.

Conclusions
At $2000/pair, the Monitor Audio Silver 300 has a lot of competition. Some of those other speakers do some things spectacularly right, and focus the listener's attention on those capabilities. I enjoyed the Silver 300 simply because it did nothing wrong. I felt no need to gain treble detail at the price of an accentuated high end, or to accept less midrange transparency in trade for a comfortable tonal balance. Regardless of the musical genre or source, the Silver 300 did the music justice.